The Goal by Eliyahu Goldratt

You could be forgiven for thinking it’s a joke—a book on optimization theory set as a novel with a kitschy cover.  But it’s no joke at all.  The Goal, written by Eliyahu Goldratt and published in 1984, does exactly that, memorably.  Time lists it in “The 25 most influential business management books”, right up there with seminal works by Drucker, Porter, and Kotter.  Reviewing the book in Forbes in 2019, Andrew Filev said “After 35 years, The Goal is still an essential read for entrepreneurs and executives”.

The lessons in the book apply to all “systems of production”—processes that transform incoming resources into higher-value outputs.  Goldratt, a physicist, reaches into the realm of philosophy to crystallize eternal truths about operations management that executives, managers, analysts, and policy-makers can absorb with relative ease and use to solve vexing problems that have befuddled senior people for centuries.

It starts with choosing the right goal.  That’s because any complex system will optimize in the direction of the primary goal.  Get that wrong and you’ll end up in the wrong place.  But identifying the right goal is sublimely tricky.  Manufacturing and service industries took decades to figure it out.  The orthodoxy of financial sys­tems, reinforced by ideas about hierarchy and accountability, drove them that way.  Hu­man nature did too:  people tend to unbundle problems in order to be able to solve them individ­ually.  So did traditional management theory:  organizations created units, delegated responsibil­ity to individ­uals to control them, and gave each of them goals for efficiency and other local­ly-allocated indices.  Unfortunately, those lead in the wrong direction because “the end result of many local optima is not the optimum for the total system”.

The Goal sets thing straight.  If you are involved with logistics and transportation, you will come away from reading it enlightened and inspired, and you won’t see things the same way again.  It’s a gem. 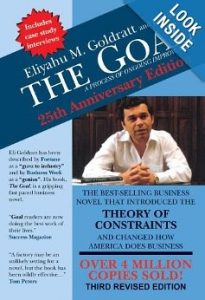